Instruction for use: Buserelin-long FS

D25 Leiomyoma of the uterus

Fibroids of the uterus

D26 Other benign neoplasms of the uterus

Liofilizate for the preparation of a suspension for intramuscular administration of prolonged action 1 fl.

Active substance: lyophilized powder (brittle lyophilizate) or compressed into a tablet porous mass of white or white with a slight yellowish tint of color.

Reduced suspension: when adding a solvent and stirring, a homogeneous suspension of white or white with a weak yellowish hue is formed; When standing, the suspension precipitates, but it is easily resuspended by shaking; The suspension must pass into the syringe freely through needle No. 0840.

Synthetic analogue of endogenous GnRH. Buserelin competitively binds to the receptors of the anterior pituitary cells, causing a short-term increase in the level of sex hormones in the blood plasma, further leading to a complete reversible blockade of the gonadotropic function of the pituitary, thus inhibiting the release of LH and FSH. As a result, there is a suppression of the synthesis of sex hormones in the gonads, which is manifested by a decrease in the concentration of estradiol in the blood plasma to post-menopausal values in women and a decrease in the testosterone content to the post -astration level in men. After the first injection of Buserelin by the 21st day in men, the concentration of testosterone decreases to the postastrational level (characteristic of the state of the orchidectomy), i.e. Called pharmacological castration. And in women, the concentration of estradiol is reduced to a level corresponding to ovariectomy or post-menopause.

The concentration of testosterone and estradiol remains reduced throughout the treatment period, which is conducted every 28 days, which leads to inhibition of growth and the reverse development of hormone-dependent tumors. After discontinuation of treatment, the physiological secretion of hormones is restored.

Bioavailability is high. Cmax in the plasma is achieved approximately 2-3 hours after the / m administration and remains at a level sufficient to inhibit the synthesis of gonadotropins by the pituitary gland for at least 4 weeks.

Hyperplastic processes of the endometrium;

Treatment of infertility (when carrying out the program of in vitro fertilization (IVF)).

From the side of the central nervous system: a frequent change of mood, sleep disturbance, depression, headache.

From the musculoskeletal system: with prolonged use - demineralization of bones with the risk of osteoporosis.

Women - headache, depression, sweating and changes in libido, dryness of the vaginal mucosa, pain in the lower abdomen, rarely - menstrual like bleeding (during the first weeks of treatment).

In men, in the treatment of prostate cancer - during the first 2-3 weeks after the first injection, buserelin can cause an exacerbation and progression of the underlying disease (associated with the stimulation of the synthesis of gonadotropins and testosterone, respectively), gynecomastia, possible flushing of the blood, increased sweating And a decrease in potency (seldom requires the withdrawal of therapy), a transient increase in androgen concentration in the blood, a delay in urination, renal edema - swelling of the face, eyelids, legs; Muscle weakness in the lower limbs. At the beginning of treatment of patients with prostate cancer, temporary pain in the bones may develop temporarily; In this case, symptomatic therapy should be performed. Individual cases of development of obstruction of the ureters and compression of the spinal cord are recorded.

The simultaneous use of Bucerelin-long FS with preparations containing sex hormones (for example, in the induction of ovulation) may contribute to the emergence of the ovarian hyperstimulation syndrome.

With simultaneous application of Buserelin-long FS may reduce the effectiveness of hypoglycemic agents.

In breast cancer and hormone-dependent prostate cancer, Buserelin-long FS is administered at a dose of 3.75 mg (1 injection) every 4 weeks. Long under the supervision of a doctor.

In the treatment of endometriosis, hyperplastic endometrial processes, the drug is administered at a dose of 3.75 mg IM once every 4 weeks. Treatment should begin in the first five days of the menstrual cycle. Duration of treatment - 4-6 months.

In the treatment of uterine fibroids Buserelin-long FS is administered at a dose of 3.75 mg IM once every 4 weeks. Treatment should begin in the first five days of the menstrual cycle. The duration of treatment before the operation is 3 months, in the remaining cases - 6 months.

In the treatment of infertility by IVF, Buserelin-long FS is administered at a dose of 3.75 mg (1 injection) IM once at the onset of folliculin (on the 2nd day of the menstrual cycle) or in the middle of the luteal phase (21-24 days) of the menstrual period Cycle, preceding stimulation. After blockade of the pituitary function, confirmed by a decrease in the serum level of estrogens, not less than 50% of the baseline (usually determined 12-15 days after Buserelin-long FS injection), in the absence of ovarian cysts (according to ultrasound data), the thickness of the endometrium is not More than 5 mm, stimulation of superovulation with gonadotropic hormones begins under ultrasound monitoring and control of the level of estradiol in serum.

Rules for preparation of suspension and drug administration

1. The drug is administered only intramuscularly.

2. The suspension for the IM injection is prepared immediately before administration with the aid of the supplied solvent.

3. The drug should be prepared and administered only by specially trained medical personnel.

4. The bottle with Buserelin-long FS should be kept strictly vertically. Easily tapping on the vial, to ensure that all the lyophilizate was at the bottom of the vial

7. Remove the plastic cap from the vial containing the lyophilizate. Disinfect the rubber stopper of the vial with an alcohol swab

9. The vial should remain stationary until the solvent is fully saturated with the lyophilizate and a suspension is formed (about 3-5 minutes). After that, without turning the vial, check the presence of dry lyophilizate at the walls and bottom of the vial. If a dry residue of the lyophilizate is found, leave the vial until it is completely soaked

10. After the residues of the dry lyophilizate have disappeared, gently stir the contents of the vial in a circular motion for 30-60 seconds until a uniform suspension is formed. Do not overturn or shake the vial

11. Insert the needle quickly through the rubber stopper into the vial. Then cut the needle cut down and, tilting the vial at an angle of 45 Ḟ, slowly fill the syringe with the suspension completely

13. Remove the needle immediately after dialing. Replace with a 0.8 × 40 mm needle, gently turn the syringe and remove air from the syringe

14. Suspension Buserelin-long FS should be administered immediately after preparation.

15. Using an alcohol tampon, disinfect the injection site. Insert the needle deep into the gluteus muscle, then slightly pull the syringe plunger backward to make sure that there is no damage to the vessel. Introduce the suspension slowly, with constant pressure on the plunger of the syringe. When clogging the needle, replace it with another needle of the same diameter.

16. With repeated injections, the left and right sides should alternate.

At present, no cases of overdose have been reported.

Among women. Patients with any form of depression during drug treatment should be under close medical supervision.

Induction of ovulation should be carried out under strict medical supervision.

In the initial stage of treatment with the drug, the development of ovarian cysts is possible.

Before the start of treatment, it is recommended to exclude pregnancy and stop taking hormonal contraceptives, however, during the first two months of using the drug, it is necessary to use other (non-hormonal) methods of contraception.

After cessation of treatment, the function of the ovaries is restored. The first menstruation resumes after 3 months.

Effect on the ability to drive and other mechanisms. Caution should be exercised when prescribing the drug to patients engaged in potentially hazardous activities requiring increased attention and speed of mental and motor reactions.

Lyophilizate for the preparation of a suspension for intramuscular administration of prolonged action, containing 3.75 mg buserelin. In bottles of dark glass with a capacity of 10 ml. 2 ml of solvent (mannitol, 0.8% solution) in a neutral glass ampoule.

When you pack the solvent into imported ampoules that have rings for opening or a break point, the ampoule scapegrator or the opener for opening the ampoule is not put. 1 circuit pack of the kit is placed in a cardboard pack.

In dry, the dark place at a temperature of no higher than 25 Ḟ C. 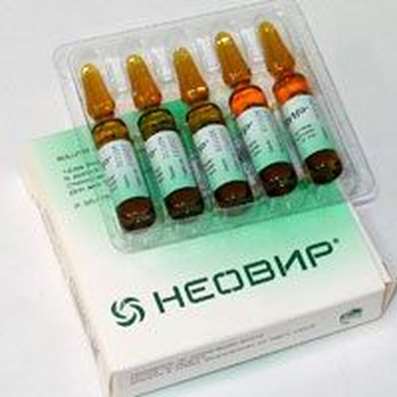 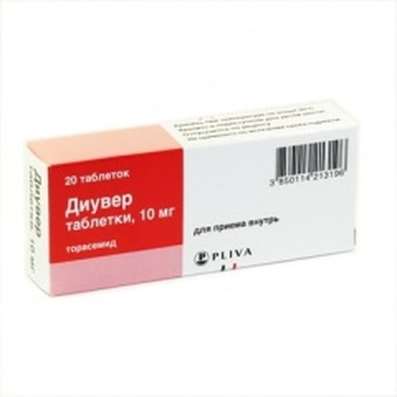 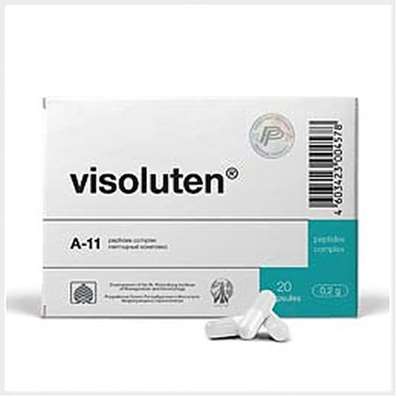 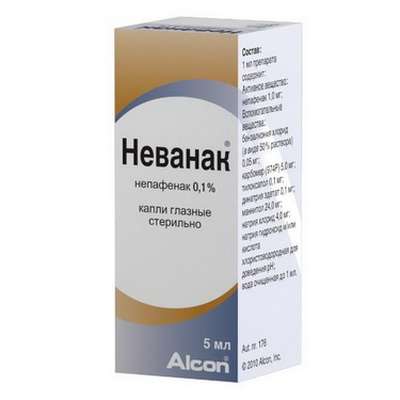 Someone from the Switzerland - just purchased the goods:
Nevanac eye drops 0.1% 5ml